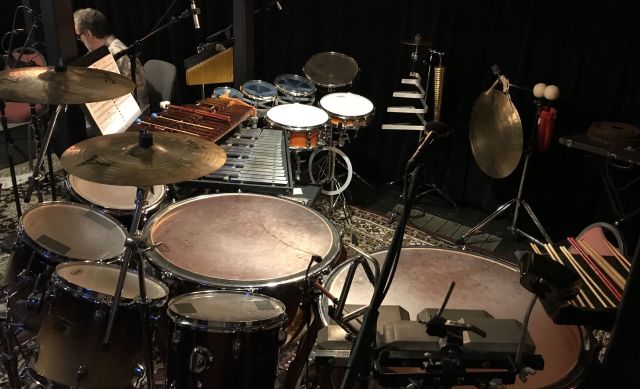 Les Misérables (Schools Edition) is a slightly shortened version of Les Mis made for the slightly shortened attention span of the intended audience, high school students and their families. It was a fun show for me to play for a number of different reasons, the skill and camaraderie of this particular group of musicians being chief among them. The percussion book also has unique instrumentation and some challenging passages in it, making it a more than worthwhile gig to take on.
The biggest difference between the Schools Edition (SE) show and the full show in the percussion book is the fact that it’s condensed into one part. Because it’s one part built from two, there are many moments where you’re called to play more than one instrument or switch quickly between two, making the arrangement of instruments very important. I don’t know why this was done, but my guess is that the editor knew that MD’s for these school gigs were only going to hire one percussionist anyway, so might as well make it easier on them.
There were some esoteric instruments to scrounge up, and some that required research. This show calls for a “Gavroche drum”, which is certainly not in the Steve Weiss catalog. A little investigation unearthed a comment by Ian Cape, who currently sits in the percussion rig in London’s West End:

So if I had a popcorn snare, I’d have finally had a use for it! Another thing people were using was a children’s toy drum. Either way, a popcorn or toy snare drum plus a field snare, concert snare, and piccolo snare would take up more space than I wanted to indulge on snares, so I ended up using just two: a larger concert snare and a 13″ piccolo.
The next challenge was the trine. If you don’t know, a trine is a newer instrument, functioning much like a bell tree but with a somewhat sinister sound. The only shows that I know of that use it is Les Mis and Wicked. They are a little expensive, $200 last I checked, and kind of hard to store, so I decided to make one. People had done it before, and so armed with a few YouTube videos of what they should look like and sound like, an 8 foot strip of aluminum ($16 at Home Depot), and a little elbow grease, I ended up with this:

The trine ends up as a cue for Valjean’s time as a forced laborer, and is only played with a downward scrape (bell tree-style), so to my ears, this instrument did everything a store-bought trine would do.

As for the assorted small metal implements called for, I ended up putting them on a brake drum, a Steve Weiss Anvil, a cowbell, and a pair of Tingsha.

As for the drums, it was important to have a station with timpani, toms, and crash cymbals close by for a few different numbers in the first act. In my original setup (shown above) I had four roto-toms set up off to the side as well. In the end, my MD and I both disliked the sound and I ended up putting all the toms & roto-toms parts together on the concert toms. This had the added benefit of getting my trine closer to the low tom, very helpful in the opening tune.